The Thermoworks Smoke is my favourite remote monitoring thermometer. I’ve tried a few including the Big Green Egg units and units from Maverick. The Smoke is by far the easiest to use and the most reliable and accurate. My advice to you is to spend a little extra to get this one, you won’t regret it. The quality compared to the Big Green Egg and Maverick is so much better too.

The Thermoworks Smoke has two thermometers:

These probes can be connected to either of the inputs on the right of the control unit. I normally run the food probe into the top and the BBQ probe into the bottom but that’s just my preference.

Turn on the unit using the on/off button on the back of the unit, a short press with turn it on.

Set the units on the back to °C or °F using the corresponding button.

The remote unit has just one button and can be turned on with a short press. It will display CON shortly while it makes a connection with the control unit. It will also display this message when you go out of range of the control unit.

Both units are turned off by pressing and holding the same buttons you used to turn them on.

To set an alarm press the set button corresponding to the alarm you want to set (food or BBQ). You’ll see the High Alarm section starts to flash. You can raise and lower the temperature for the alarm using the arrowed buttons at the bottom of the unit.

Press the Set button again to move on to the Low Alarm and repeat the set process.

A final press of the Set button will store the new alarm temperatures and stop both the Hi and Low Alarms flashing.

For food alarms I tend not to set a low alarm, I’m not worried about food cooling down. I will only set a High Alarm, the temperature I want to food to reach.

For the BBQ I will set a High and Low alarm equidistant from the temperature I want to run my Egg at, for example if I am doing a cook at 110°C, I will set the High and Low alarms 15°C either side of this at 125°C for the High and 95°C for the Low. I set the temperatures like this as your Egg temperature will fluctuate a little. You only need to be notified if it’s fluctuating a lot, especially if you’re doing an overnight cook, there’s nothing worse than being woken up every half hours as your Egg has got 5°C warmer.

When an alarm sounds you can silence it off by pressing the On/Off button for that alarm on the Control Unit and the main button on the Remote Unit.

If you don’t want to use alarms then the On/Off button can also be used to turn off the alarms, it will display on the Control Unit screen whether alarms are on or off for the individual probe.

Never put the probes in the dish washer or washing up. The probes will fail if you wash them.

The only way you should clean them is to use an anti bacterial cleaning wipe on the probe.

The probe wire will survive being rained on in my experience. The Control Unit is specified as only being slash proof. I therefore will cover my Control Unit with a plastic zip-lock bag if it is going to rain just to be on the safe side.

The Control Unit has a fold out stand on the back allowing it to sit upright and be viewed from a distance.

There are also two strong magnets on the back so you can attach the Smoke to the handle of your Big Green Egg.

On the front of the Control Unit there is also a button to turn on the backlight for the unit. This can be very handy when cooking late in to the evenings.

You can buy this direct from ETI, the UK distributor through their Amazon page. By buying it with the following link you’ll also be supporting this site’s recipe development as for every unit sold I get a very small advertising fee.

Buy a Thermoworks Smoke from Amazon. 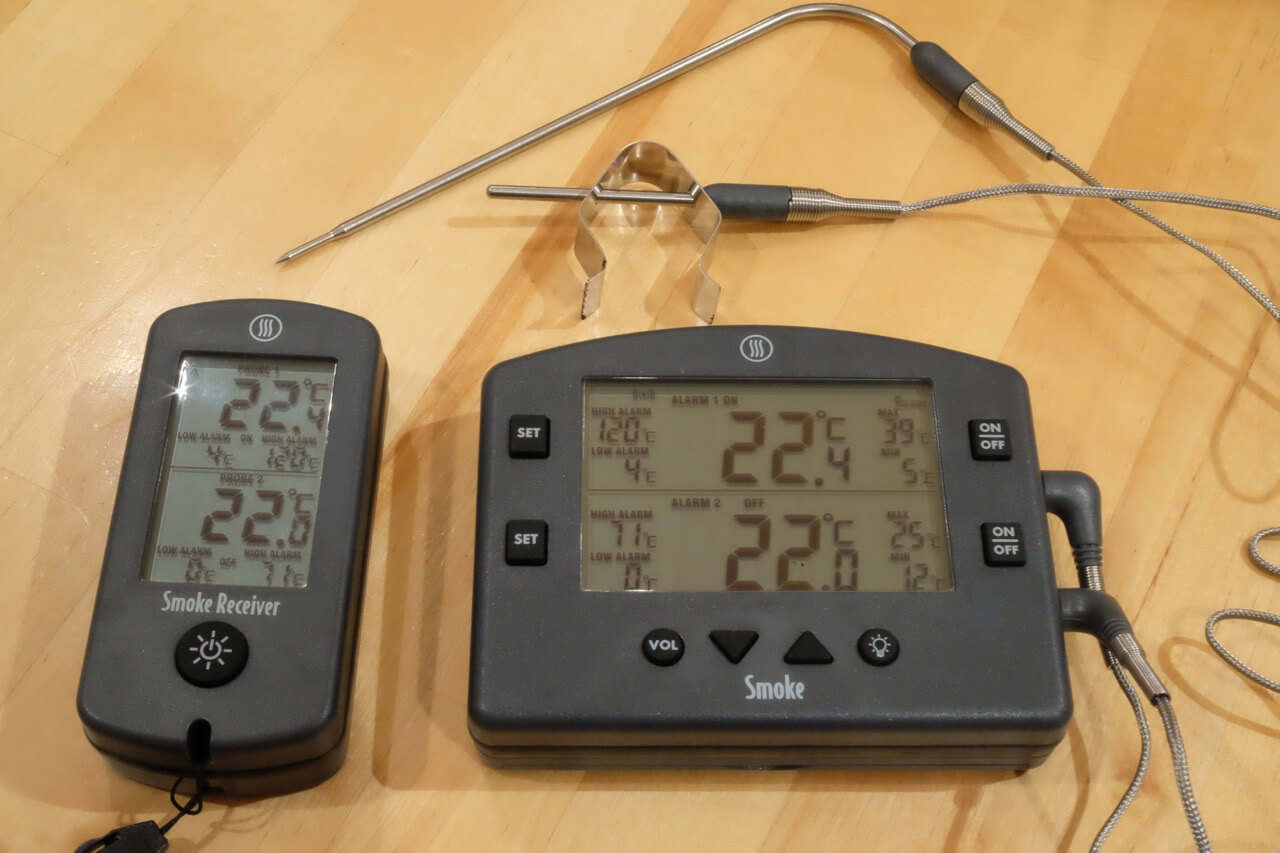 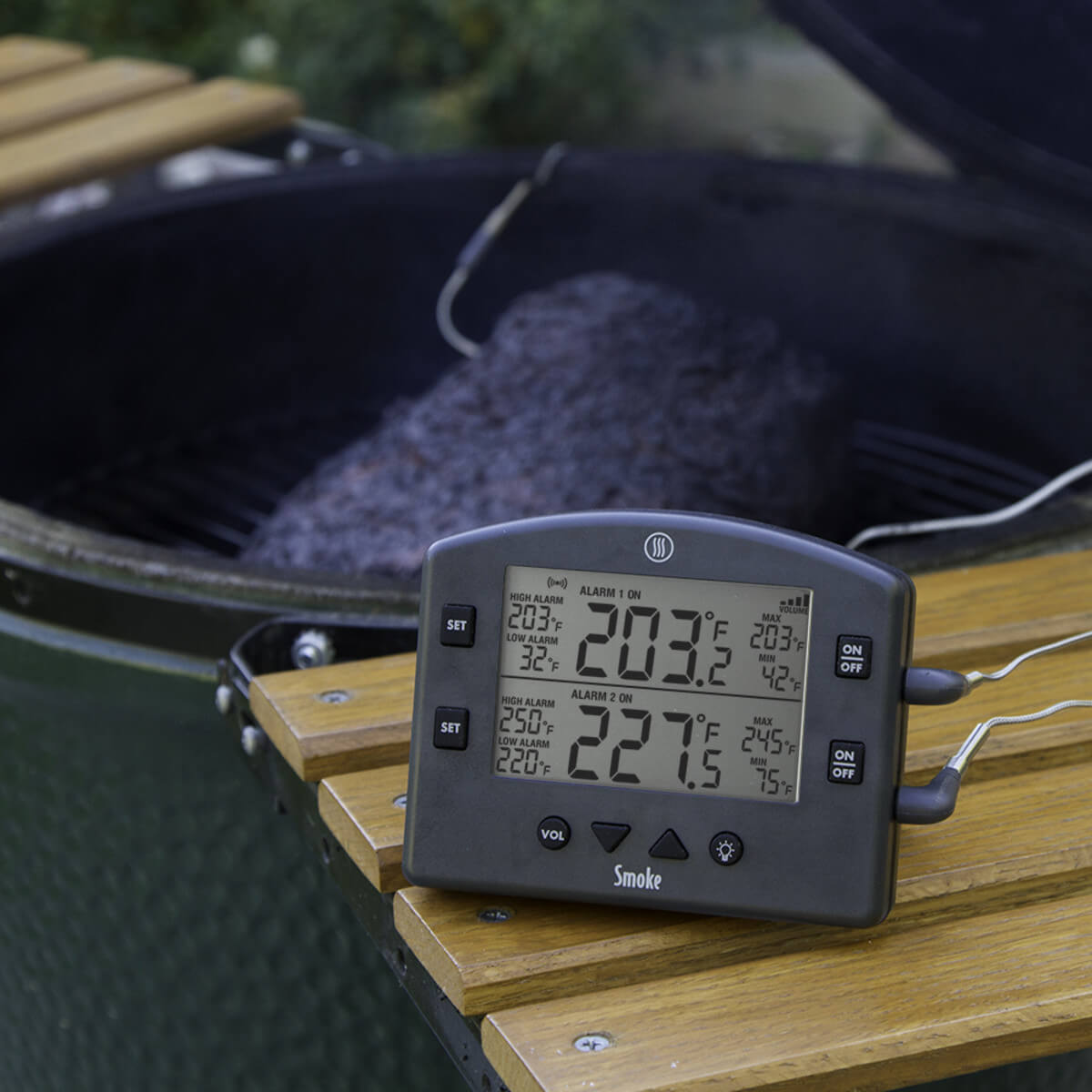 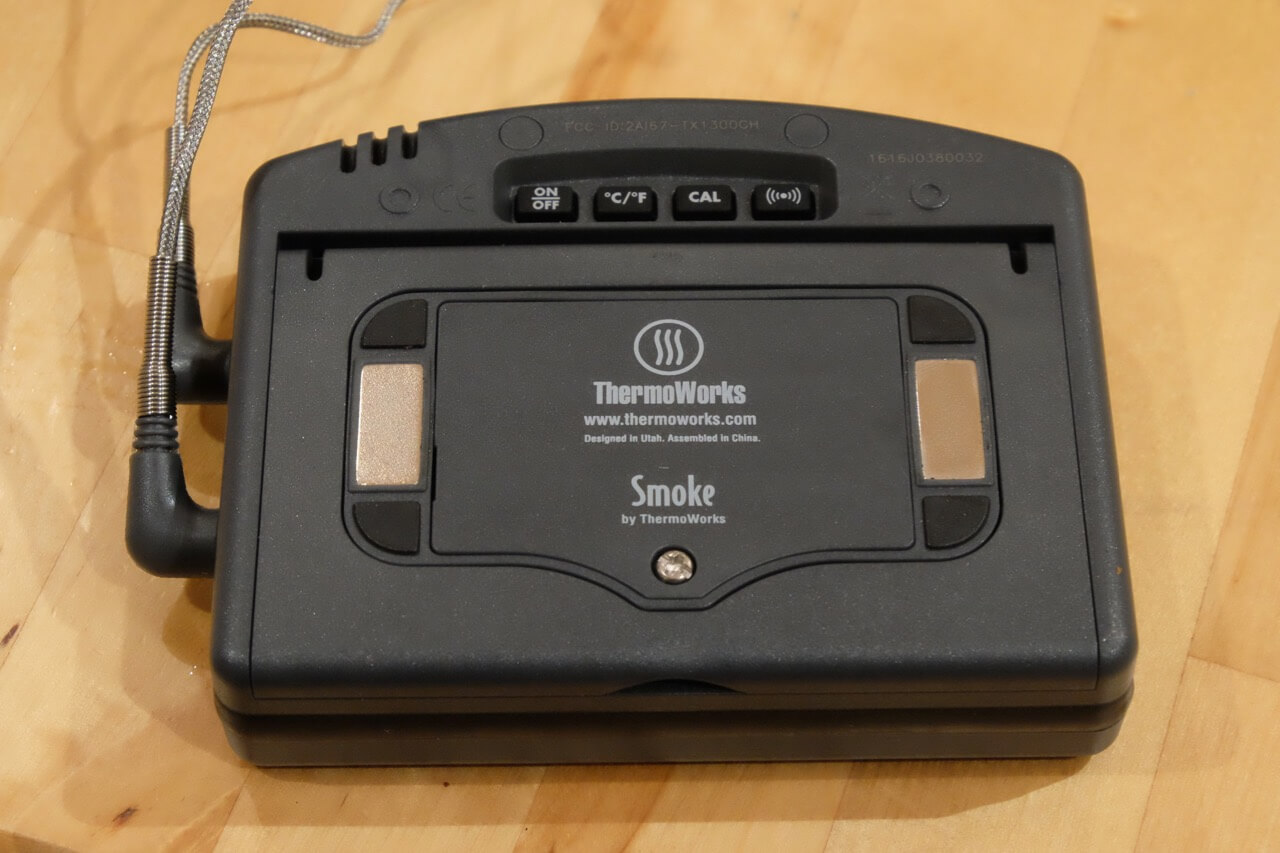 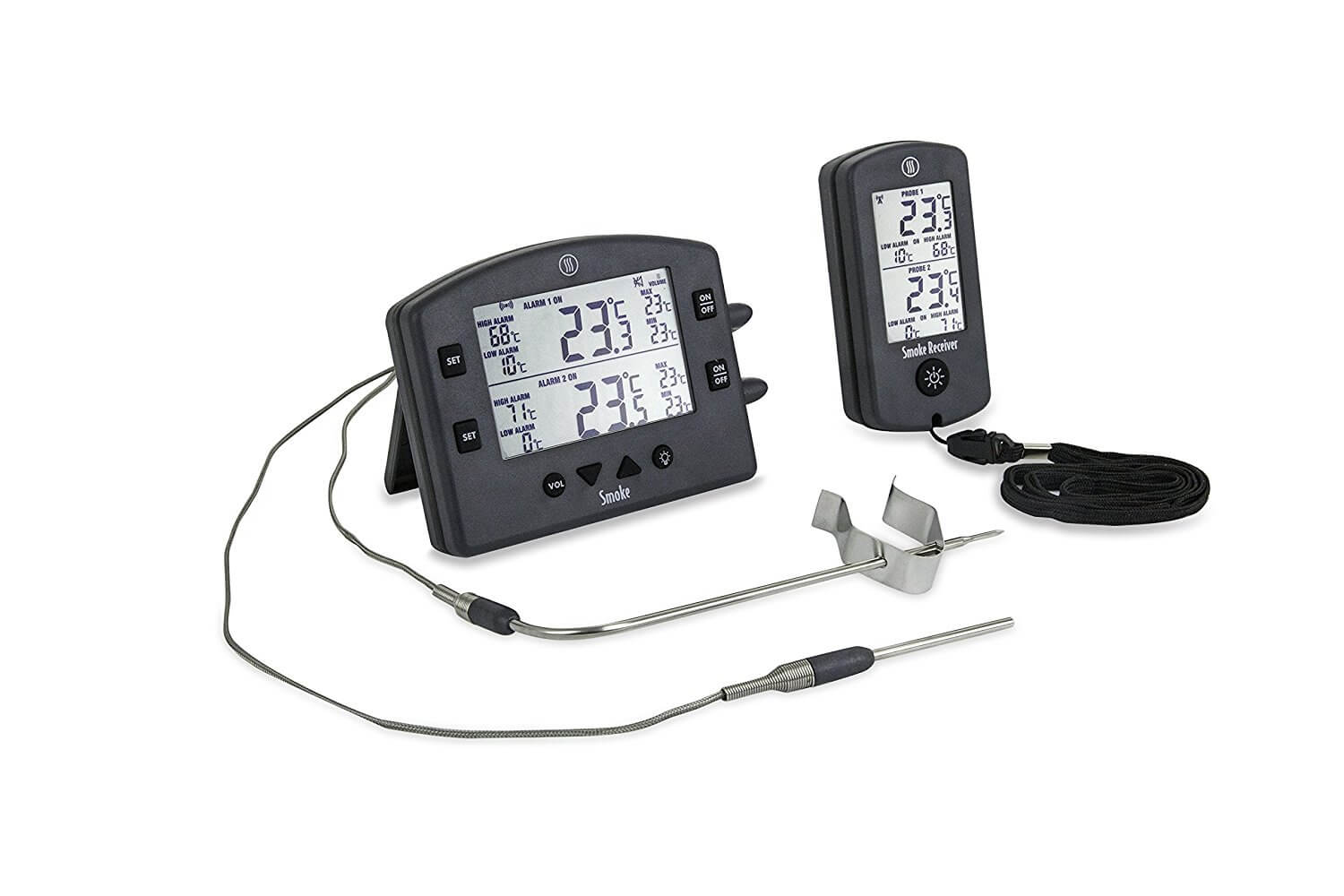 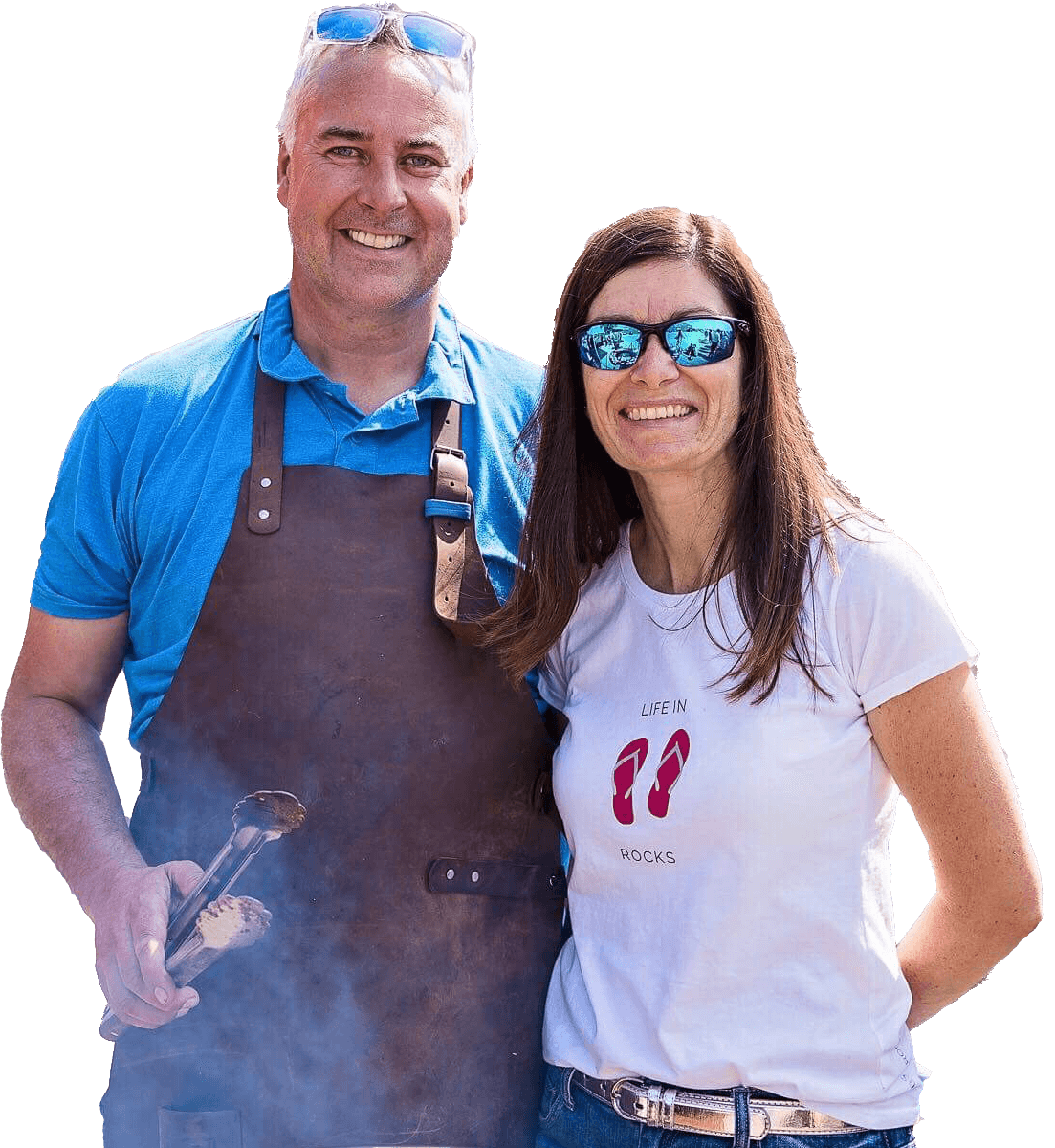 We're taking a week off