Smartfire, a review on controlling the Big Green Egg

Most people are happy to use their BBQ, especially their Big Green EGG, without using devices to help them control the temperature, after all the Egg is superb at just sitting at the temperature you dial it into for hours on end. However, once you move on to some of the longer cooks, a pork shoulder for example where you might cook it for anything up to 20 hours, it’s nice to employ a bit of technology sometimes to make your cook easier.

The simplest way of monitoring a cook is to open the lid every so often and have a look. After that you might want to use something like the excellent Thermapen Professional to actually probe your meat and find out what temperature it’s at. The next step is to use a wireless probe to relay that information to you in the comfort of your armchair, something like the Meater+.

All of these solutions are great, they can tell you exactly what is going on inside your Egg. The downside though, is that to do something about it, you have to go and adjust your Egg. Here’s where ‘Forced Air Controllers’ come in. They’re the next step. By adding a fan and a control unit to your Egg, it can monitor the temperature of your Egg and adjust the airflow to adjust the temperature, just like your oven would do, brilliant.

These controllers have become far more sophisticated over the years with the modern ones being Wi-Fi enabled. What does that mean? Well it means there’s normally an app to not only monitor your Egg and what’s cooking inside of it, but an app that also allows you to adjust the temperature of your Egg from the app. Think about it, that means you can see what’s going on not only from the comfort of your armchair, but also your work, the pub or bed if you’re doing an overnight cook.

The Smartfire is one of these Wi-Fi (and Bluetooth) enabled forced air controllers. The unit itself connects to your large or extra-large Egg and with a thermometer attached to your grill and three others to monitor what’s cooking, it will control your Egg by blowing the perfect amount of air into your Egg.

I was sent a Smartfire to review. I’ve used a number of this type of device and alongside the Smartfire I have a Flameboss 300, a BBQ Guru DigiQ DX2 and several HeaterMeters. The Smartfire arrived in a carry case, the only one of the devices I own to have a case designed to keep all the parts together. While this seems like a small point, with 4 temperature probes all on wires, everything usually gets all tangled up no matter how hard you try to be neat and tidy.

Inside the case there are also 4 spring loaded probe reels that allow you to roll up the cables after a cook and keep them tangle free. This is absolutely genius and sets the Smartfire apart from any of the others when it comes to storage.

The whole box is well thought out and keeps everything neat and tidy. I love this. 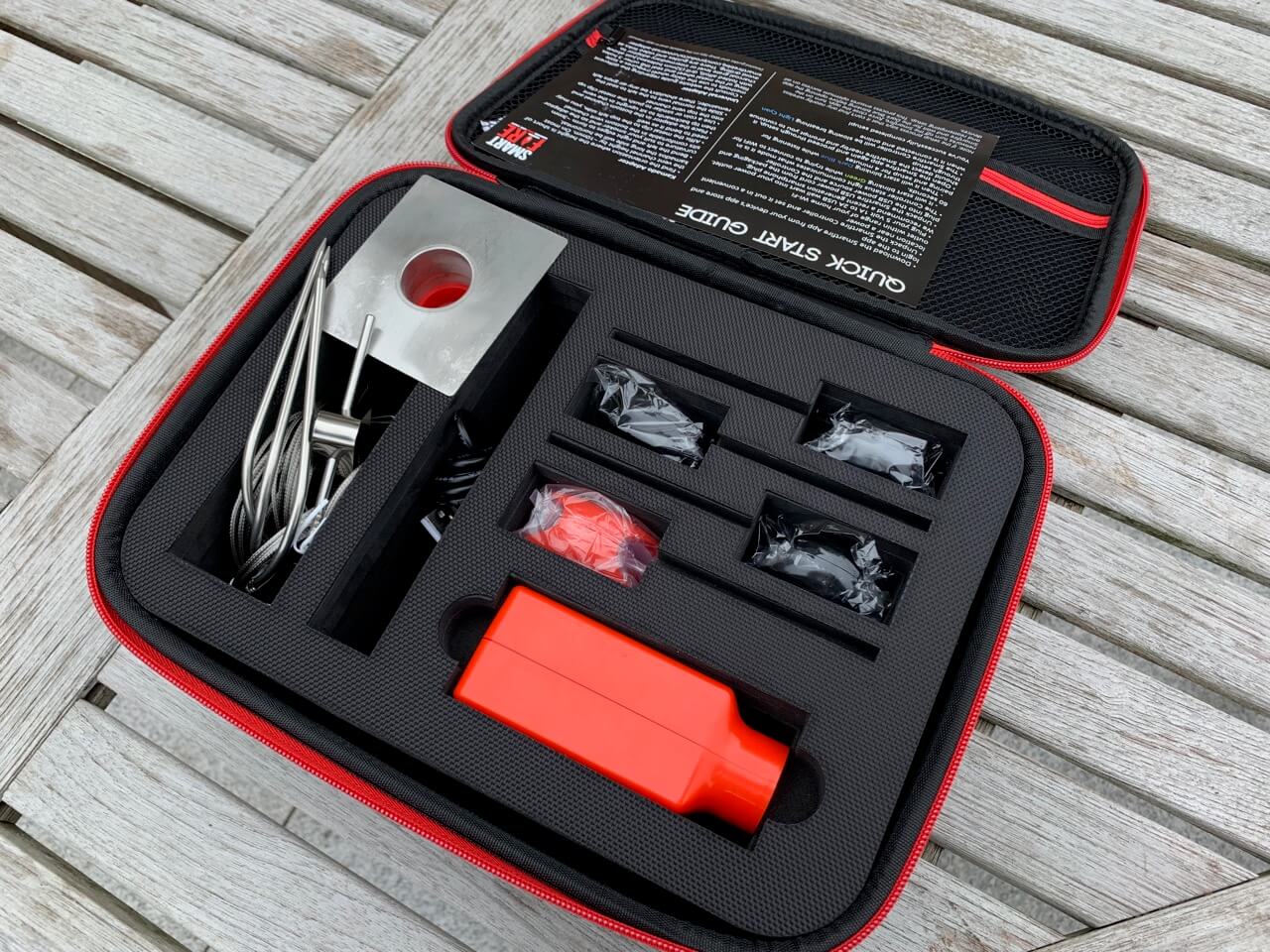 The Smartfire came with a plate to connect it to the draft door of the Egg. This is very similar to several of the other devices with the exception of it being slightly thicker material. The instructions get you to bend it to the curvature of the Egg, which is fine, as long as you’re only going to use it on one size of Egg. I own both a large and XL Egg and that requires the plate to be used different way rounds. Any bending would mean it would only work with one Egg. I managed to make it work though with no bending on both sized Eggs but that means it is transferring a little force to your Eggs draft door. I’ve not broken anything, but I’d rather have a thinner plate.

Interestingly unlike the Flameboss, there is no plate as standard for some of the smaller Eggs, I’ve used my Flameboss on my MiniMax, the Smartfire couldn’t be used on this size of Egg, well not without cutting down the plate.

Once you have the plate on your Egg, you push the Smartfire controller into the tube of the attachment plate, yes into. All my other devices go around it. I didn’t see this as an issue until a piece of charcoal fell through the grate and directly into the Smartfire. Fortunately, it didn’t set it on fire, but it did melt it a bit (I’m guessing I have to return it in this state).

To this unit you connect the power and thermometers, a total of 5 leads. All of this works fine. On other devices I have had a separate fan unit from the controller, I’m not bothered either way about this.

The unit itself has a single coloured LED that flashes or glows different colours to show you the status of the device. This works. It doesn’t have a screen though unlike the DigiQ, HeaterMeter or Flameboss 300, you have to have it connected through the app on your phone.

In use the controller does a very reasonable job of controlling the Egg. Its software targets a temp below your set temp and aims for that. It then adjusts to aim at your set temp. This is a great idea as it means it doesn’t overshoot the set temp too much. I’ve seen the Flameboss overshoot by over 10°C before.

I used the Smartfire on a backup mobile phone charger and was amazed at just how little power it used. My 12,000mAh charger will run the Smartfire for at least 48 hours I suspect, possibly even longer.

Most cooks went to plan. However, on one overnight cook on a damp day the Smartfire alarmed me to tell me my cook was almost done (at 4:30am). No problem, except that the alarm was coming from the second meat probe that wasn’t even plugged in. The Smartfire was covered and wasn’t being rained on but it didn’t like the moist air for sure.

Later that cook the third probe also started reporting its cook, again no probe was plugged in. Since that day it’s behaved fine. I do wonder though if moisture was getting into the Smartfire from the Egg. On really long slow cooks you often see moisture coming from the condensation of steam and running out of the draft door.

All of these devices rely on being easy to setup, easy to use and informative. Out of the box the Smartfire connected straight to my phone and I was then able to put it straight onto my Wi-Fi network. This is just the start I wanted. I did this in my kitchen.

Outside connected to the Big Green Egg it fired up and connected straight to the network, so no problems there either.

As for the app, I find the user interface clunky. The Flameboss app is good, the one for the Meater and Meater+ is great. The Smartfire interface is functional, everything works, but you can see this is a new product.

When you set up your cook I experienced not being able to scroll down to the option I needed on a screen. The graph on the main screen is limited, you have to open it to really see what’s going on.

Once you’re in the graph and doing a longer cook the app doesn’t auto scale, the first part of your cook will go off the screen. You then have to go into the setup and choose the duration of the graph to be displayed. On other apps you see the whole graph and if you want to see detail you can then pinch to zoom. I find the graph here clunky and old school.

At the moment the facility to look back on previous cooks is in beta. Again, this is a must and auto saving old cooks, something I expect. It’s getting there but not there yet.

There was nothing in the instructions about there being a web interface, something I found myself wanting so I could monitor my cook on a laptop. Only by joining the Smartfire community on Facebook did I find out there is a web interface. It’s built to mimic the app, so it doesn’t really take advantage of there being far more screen real-estate except that the menu is available down the left hand side. It’s no more intuitive though than the app.

This graph shows my two phantom traces, the yellow and bright green lines. Neither of these ports had a probe plugged into it.

The Smartfire is packaged really well. The box and probe reels set it apart from the competition. In use, bar one cook where there were phantom readings, it has performed well. However, it’s really let down by a poor user interface on both the app and the web portal.

Would I buy one, I really don’t know that I would until the software of the user interface is improved. It will get better, there are constant changes coming along but at the mo I don’t like it.

I should say I’ve never needed a controller that has multiple probes, to me this isn’t a big deal. I tend to only cook one big piece of meat at a time. I’ve therefore not run the controller monitoring more than one cook at a time.

None of these units are perfect.

The best user interface is on the Meater, but that unit isn’t a forced air controller. I’m guessing they’ll add a Wi-Fi enabled fan to their line-up in the near future and if they do they’ll have a winner.

The best forced air controller I’ve used for both user interface and control is the Flameboss 300. It’s not got the best control algorithms; it tends to bounce around a little. They also suffer server failures on almost every American holiday frustrating all their users.

The DigiQ provides the most stable cook but it doesn’t have any internet connectivity.

The HeaterMeter is the most fun if you like building things yourself. It’s a great controller and the only one you can tune to your own BBQ.

The Big Green Egg Genius is a rebranded Flameboss 400 with the ability to accept multiple meat probes, not just the one that the Flameboss 400 normally handles.